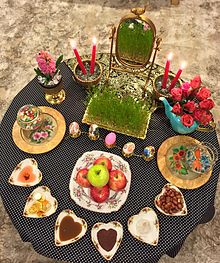 The basis of nearly all of Iranian national festivals are from its Pre-Islamic Zoroastrian era. However, there are some festivals that are celebrated exclusively by Zoroastrians and some with less extent in other communities too.

The majority of Iranian Christians are Armenian-Iranians also known as Parska-Hye who follow the Armenian Apostolic Church, an Oriental Orthodox branch of Christianity. This minority has their very own special festivals and traditions.

There is also a significant minority of Assyrian people who follow the Oriental Orthodox Christian Assyrian Church of the East and the Chaldean Catholic Church, these two church groups also have a minority of Persian followers. The followers of this church have a blend of Persian and Assyrian culture.

Iran has an overwhelmingly Muslim population but the Christian Community has a visible presence. During Christmas times, Christmas trees can be seen from windows in Tehran and north-western provinces. Although Christmas has an official recognition in Iran, it is not a national holiday.