Vidya Balan (born 1 January 1979) is an Indian actress. Known for pioneering a change in the portrayal of women in Hindi cinema with her roles in female-led films, she is the recipient of several awards, including a National Film Award and six Filmfare Awards. She was awarded the Padma Shri by the Government of India in 2014.

Vidya aspired to a career in film from a young age and had her first acting role in the 1995 sitcom Hum Paanch. While pursuing a master’s degree in sociology from the University of Mumbai, she made several unsuccessful attempts to start a career in film, and featured in television commercials and music videos. She made her film debut by starring in the Bengali film Bhalo Theko (2003) and received praise for her first Hindi film, the drama Parineeta. This was followed by commercial successes in Lage Raho Munna Bhai (2006) and Bhool Bhulaiyaa (2007), but her roles in the romantic comedies Heyy Babyy (2007) and Kismat Konnection (2008) had negative reviews.

Vidya went on to establish herself by starring in five consecutive commercial successes, which also earned her critical and awards recognition. These were in the drama Paa (2009), the black comedy Ishqiya (2010), the thrillers No One Killed Jessica and Kahaani (2012), and the biopic The Dirty Picture (2011). The last of these won her the National Film Award for Best Actress. She followed this with a series of films that performed poorly at the box office. This changed when she starred as a radio jockey in Tumhari Sulu (2017) and a scientist in Mission Mangal (2019). The latter ranks as her highest-grossing release. Vidya has since starred in the Amazon Prime Video films Shakuntala Devi (2020), Sherni (2021), and Jalsa (2022).

Vidya also promotes humanitarian causes and supports the empowerment of women. She is a member of the Indian Central Board of Film Certification and hosts a radio show. She initially drew criticism for her fluctuating weight and dress sense, but was later credited in the media for her unconventionality. Vidya is married to the film producer Siddharth Roy Kapur.

Vidya was born on 1 January 1979 in Bombay (present-day Mumbai), into a Tamil Brahmin family. Her father, P. R. Balan, is the executive vice-president of Digicable and her mother, Saraswathy Balan, is a homemaker. According to Vidya, they speak a mix of Tamil and Malayalam at home. Her elder sister, Priya Balan, works in advertising. The actress Priyamani is her second cousin.

Vidya grew up in the suburban neighbourhood of Chembur, Mumbai and attended St. Anthony Girls’ High School.  From a young age, she aspired to a career in film and was inspired by the work of actors Shabana Azmi and Madhuri Dixit. At the age of 16, she starred in the first season of Ekta Kapoor’s sitcom Hum Paanch as Radhika, a bespectacled teenager.  After the series ended, Vidya refused director Anurag Basu’s offer to star in a television soap opera, as she wanted to concentrate on a film career. Her parents were supportive of the decision but encouraged her to complete her education first.  She attended St. Xavier’s College to pursue a bachelor’s degree in sociology and later earned a master’s degree from the University of Mumbai.

While pursuing her master’s degree, Vidya was cast as the female lead in the Malayalam film Chakram, opposite Mohanlal and was subsequently signed on for 12 other Malayalam language films. However, due to production difficulties, Chakram was shelved. The postponement of a film starring Mohanlal was an unheard occurrence in Malayalam cinema and producers blamed Vidya for bringing “bad luck” to the project; labelled her as a “jinx”; and replaced her in the films that she had been contracted for. She shifted focus to Tamil cinema. In 2001, she was cast as the female lead in N. Linguswamy’s Run (2002). However, after completing the first shooting schedule, she was unceremoniously dropped and replaced by Meera Jasmine. She was signed up under false pretences for a sex comedy, a genre she was uncomfortable with, and decided to leave the project. She was also replaced by Meera Jasmine in Bala (2002).  Thereafter, she signed on for a third Tamil film, Manasellam (2003), but was replaced by Trisha as the director was dissatisfied with her work. Kalari Vikraman, another Malayalam film that she completed work for in 2003, failed to get a theatrical release.[23][24] After failing to start a film career, Vidya appeared in approximately 60 television commercials and in music videos for Euphoria and Shubha Mudgal; a majority of these were directed by Pradeep Sarkar. 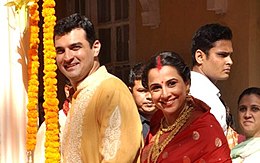 The mass media has often speculated about a romantic relationship between Vidya and her co-actors, but she has strongly denied these reports. In 2009, Vidya was involved in a controversy when she mentioned a previous relationship in which “caustic remarks” were made at her due to her weight. She said, “If someone who matters to you takes you down, it can break you. That someone whose approval mattered to me started to constantly find faults with me. At that point of time, it was important to walk away from that relationship.” Though she refused to name the person, tabloid reports suggested that she was referring to Shahid Kapoor (her co-star in Kismat Konnection).[157] Kapoor, however, denied the allegations.  During an interview in May 2012, Vidya announced that she was dating Siddharth Roy Kapur, the CEO of UTV Motion Pictures. On 14 December 2012, the couple were married in a private ceremony in Bandra, Mumbai.

Vidya is trained in Carnatic music and briefly studied the dance forms of Bharatnatyam and Kathak.  Regarding her religious affiliations, Vidya said, “I am a person with a lot of faith and I have conversations [with God] all the time but I am not so religious in the conventional, organised sense”. She practices vegetarianism and was listed as “India’s hottest vegetarian” in polls conducted by PETA in 2011 and 2012.[162][163] Her weight fluctuations over the years have been the subject of substantial media coverage in India.

In March 2011, Vidya endorsed World Wildlife Fund’s Earth Hour campaign in India. She campaigned for the cause of nutrition in India for Child In Need Institute (CINI), a non-profit organisation based in Kolkata. In September 2012, Vidya visited a village in Mirzapur, Uttar Pradesh, where she participated in a campaign to promote children’s education and the empowerment of women. For her attempts to empower women, Vidya was awarded the Prabha Khaitan Puraskar 2012 by the Calcutta Chamber of Commerce; she was the youngest recipient of the award. In 2012, she became the first brand ambassador of the country’s sanitation programme, later renamed as the Swachh Bharat Abhiyan. Since then, she has been part of a nationwide television and radio campaign aimed to increase construction and use of toilets.

In 2013, Vidya served as the grand marshal of the India Day parade held in New York City.  In the same year, she launched a technology-based learning platform for underprivileged children in the Thanapur village of Uttar Pradesh.  Also that year, Vidya featured as the host of No More Kamzor, a television special on women empowerment.  On the occasion of International Women’s Day in 2015, Vidya wrote an opinion column in Hindustan Times on the issues faced by women in India. In August 2017, Vidya was made a member of the Indian Central Board of Film Certification, to certify films for theatrical exhibition. The following year, she became the goodwill ambassador of Arpan, an NGO that creates awareness on sexual abuse. In 2019, she collaborated with BIG FM 92.7 to host a radio show named “Dhun Badal Ke Toh Dekho”.

The Anandalok Awards are awarded annually by the ABP Group in Kolkata to professionals of the Bengali and Hindi film industries.  Vidya has won the award twice.

The Asian Film Awards are presented annually by the Hong Kong International Film Festival Society to members of Asian cinema. Vidya has received one nomination.

The Asia-Pacific Film Festival is organised by the Federation of Motion Picture Producers in Asia-Pacific. Vidya has received one nomination at the festival.

The Asia Pacific Screen Awards is an annual ceremony held by the Brisbane City Council, Australia in association with the United Nations Educational, Scientific and Cultural Organization and the Fédération Internationale des Associations de Producteurs de Films.  Vidya has received one nomination.

The BIG Star Entertainment Awards is an annual event organised by the Reliance Broadcast Network. Vidya has won two awards from seven nominations.

The FICCI Frames Excellence Honours is an annual award ceremony organised by the Federation of Indian Chambers of Commerce and Industry. Vidya has won three awards.

Established in 1954, the Filmfare Awards are presented annually by The Times Group to members of the Hindi film industry. Vidya has won six awards.

The National Film Awards are awarded by the Government of India’s Directorate of Film Festivals division for achievements in the Indian film industry. Vidya has received one award.

The Screen Awards ceremony is organised by the Indian Express Limited to members of Hindi and Marathi cinema. Vidya has received six awards from ten nominations, including four consecutive Best Actress wins.

The Zee Cine Awards are an annual award ceremony organised by the Zee Entertainment Enterprises. Vidya has received five awards.

Other awards and honours