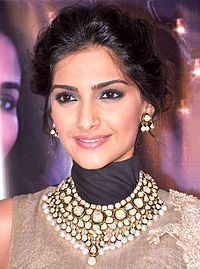 Sonam Kapoor Ahuja (born 9 June 1985) is an Indian actress who works in Hindi films. She has won a National Film Award and a Filmfare Award, and from 2012 to 2016, she appeared in Forbes India‘s Celebrity 100 list based on her income and popularity.

Kapoor, the daughter of actor Anil Kapoor, began her career as an assistant director on filmmaker Sanjay Leela Bhansali’s 2005 film Black. She made her acting debut in Bhansali’s romantic drama Saawariya (2007), a box office flop, and had her first commercial success with the romantic comedy I Hate Luv Storys (2010). This was followed by a series of commercial failures and repetitive roles, which garnered her negative reviews. The 2013 box office hit Raanjhanaa marked a turning point in Kapoor’s career, garnering her praise and Best Actress nominations at several award ceremonies. Kapoor had her biggest commercial successes with supporting roles in the biopics Bhaag Milkha Bhaag (2013) and Sanju (2018), and a leading role in the romance Prem Ratan Dhan Payo (2015); the latter two rank among the highest-grossing Bollywood films. Her acclaimed portrayal of Neerja Bhanot in the 2016 biographical thriller Neerja won her the National Film Award – Special Mention and a Filmfare Critics Award for Best Actress, and she followed it with a starring role in the 2018 female buddy film Veere Di Wedding, both of which rank among the highest-grossing female-led Hindi films.

Kapoor supports the raising awareness of breast cancer and LGBT rights. Known in the media for her outspoken personality, she is frequently credited as one of India’s most trendy celebrities. She is married to the businessman Anand Ahuja.

Kapoor with her father Anil Kapoor at a film’s screening in Mumbai, 2011

Kapoor was born in the Chembur, Bombay (present-day Mumbai) on 9 June 1985.  Her father is actor and producer Anil Kapoor, the son of the late filmmaker Surinder Kapoor and the founder of the Anil Kapoor Films Company. Her mother, Sunita, is a former model and designer. Kapoor has two younger siblings: film producer Rhea and brother Harshvardhan.  She is the niece of film producer Boney Kapoor and actor Sanjay Kapoor; actress Sridevi and producer Mona Shourie (Boney’s wives) were her aunts.  Kapoor’s paternal cousins are actors Arjun Kapoor, Janhvi Kapoor and Mohit Marwah, and maternal second cousin is actor Ranveer Singh.

The family moved to the suburb of Juhu when Kapoor was one month old. She was educated at the Arya Vidya Mandir school in Juhu,  where she confessed to being a “naughty” and “carefree” child who would bully the boys.  She excelled at sports such as rugby and basketball,  and trained in Kathak, classical music and Latin dance.  Kapoor, who practices Hinduism, states that she is “quite religious”, and that it is a way of “reminding myself that I need to be thankful for so much”.

Kapoor’s first job was as a waitress at age 15, although it lasted only a week. As a teenager, she struggled with her weight: “I had every issue related to weight that I could have. I was unhealthy, I had bad skin, and I had hair growing on my face!”  Kapoor was diagnosed with insulin resistance and polycystic ovarian disease,  and has since begun an initiative to increase awareness of diabetes.  Kapoor enrolled at the United World College of South East Asia in Singapore for her pre-university education, where she studied theatre and arts.  She has said she later started courses in economics and political science through University of Mumbai correspondence programme, after returning from University of East London where she began her bachelor’s degree in the same subjects but returned to Mumbai soon after she began. Actress Rani Mukerji, a family friend, visited her family in Singapore on holiday while working on Black (2005). Kapoor, who had originally wanted to be a director and writer,  expressed a desire to work as a crew member on the film. On her father’s recommendation to director Sanjay Leela Bhansali, she was appointed as his assistant.

Kapoor in an press meet