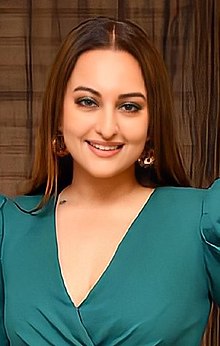 Sonakshi Sinha (born 2 June 1987) is an Indian actress who works in Hindi films. After working as a costume designer for independent films, she made her acting debut portraying Rajjo Pandey in the action film Dabangg in 2010, which won her the Filmfare Award for Best Female Debut. She rose to prominence for playing the romantic interest of the male protagonists in several action films, including Rowdy Rathore (2012), Son of Sardaar (2012), Dabangg 2 (2012), and Holiday: A Soldier Is Never Off Duty (2014), and for appearing in a variety of item numbers.

Sinha garnered critical acclaim for her playing a troubled woman suffering from tuberculosis in the period drama Lootera (2013), for which she earned several accolades, including a nomination for the Filmfare Award for Best Actress.  She has since starred in several commercially unsuccessful film, with the exception of Mission Mangal (2019) in which she had a supporting role.

Aside from acting, Sinha has ventured into singing, beginning with a song in her film Tevar (2015). Her debut single, “Aaj Mood Ishqholic Hai” was released in 2015, and she has sung in a total of four films, which include “Rafta Rafta Medley”, featured in the soundtrack of Yamla Pagla Deewana: Phir Se (2018).

Sinha was born on 2 June 1987 in Patna, Bihar,  to film actors Shatrughan Sinha and Poonam Sinha (née Chandiramani). Her father belongs to a Bihari Kayastha family while her mother hails from a Sindhi Hindu family.  Her father served as a Member of Parliament of the Bharatiya Janata Party,  before he switched to the Indian National Congress in 2019. Sinha is the youngest of three children – she has two (twin) brothers, Luv Sinha and Kush Sinha. She did her schooling at Arya Vidya Mandir and later graduated in fashion designing from Premlila Vithaldas Polytechnic of Shreemati Nathibai Damodar Thackersey Women’s University.