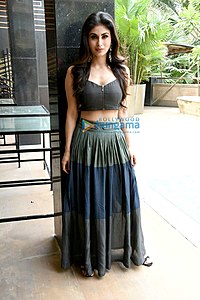 Mouni Roy (born 28 September 1985) is an Indian actress, singer, Kathak dancer and model, who primarily works in Hindi films and television.  She debuted into television in 2006 with the role of Krishna Tulsi in the popular soap opera Kyunki Saas Bhi Kabhi Bahu Thi on Star Plus. After featuring in several other shows, she got her breakthrough with the show Devon Ke Dev…Mahadev on Life OK in 2011 where she played Sati. She also essayed Meera in Life OK’s Junoon – Aisi Nafrat Toh Kaisa Ishq and participated in Zara Nachke Dikha (2008), Jhalak Dikhhla Jaa 7 (2014), Box Cricket League 2 (2016) and Lip Sing Battle (2017).

Roy made her Hindi film debut in Reema Kagti’s sports drama Gold (2018), a critical and commercial success that also garnered her a Filmfare Award for Best Female Debut nomination.[8] In 2019, she ventured into singing with the remake single Bheegi Bheegi Raaton Mein, and appeared in the films Romeo Akbar Walter and Made in China, co-starring John Abraham and Rajkummar Rao, respectively.

Mouni Roy was born in Cooch Behar, West Bengal on 28 September 1985 into a Rajbongshi family.  Her grandfather, Shekhar Chandra Roy was a well-known Jatra theatre artist. Her mother Mukti was a theatre artist, and her father Anil Roy was an office superintendent of the Cooch Behar Zilla Parishad. She did her schooling till class 12th from Kendriya Vidyalaya in Baburhat, Cooch Behar and then went to Delhi. She took up mass communication at Jamia Milia Islamia at her parents’ insistence, but left the course midway and went to Mumbai to try her luck in the Bollywood film industry.  She finished her part 1 exams and did not return to Delhi after that.  Mouni had an interest in acting since her childhood and cited actresses Madhubala, Madhuri Dixit and Waheeda Rehman as her acting idols.

Roy has been awarded the UAE golden visa due to her frequent visits to the country.