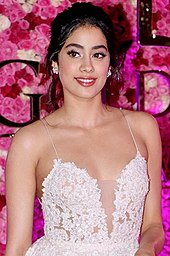 Janhvi Kapoor (born 6 March 1997) is an Indian actress who works in Hindi films. Born to Sridevi and Boney Kapoor, she made her acting debut in 2018 with the romantic drama Dhadak, which was a commercial success. Kapoor went on to receive a nomination for the Filmfare Award for Best Actress for playing the titular aviator in the biopic Gunjan Saxena: The Kargil Girl (2020).

Janhvi Kapoor was born on 6 March 1997.  Her father is Boney Kapoor, the son of the late filmmaker Surinder Kapoor, and the founder of the Anil Kapoor Films Company.  Her mother is actress Sridevi, titled the “First Female Superstar” of Indian cinema and one of its most influential actresses. She is the niece of film actors Anil Kapoor and Sanjay Kapoor. She has one younger sister, Khushi, and two half siblings, actor Arjun Kapoor and Anshula Kapoor from her father’s first marriage.  Kapoor lost her mother at age 21, when she was found dead of an accidental drowning in her guest room at the Jumeirah Emirates Towers Hotel, in Dubai, United Arab Emirates.

Kapoor studied at Dhirubhai Ambani International School in Mumbai. Before making her film debut, she took an acting course from Lee Strasberg Theatre and Film Institute in California.

Kapoor made her acting debut in 2018 with the Shashank Khaitan-directed romance Dhadak, co-starring Ishaan Khatter. A Hindi-language remake of the 2016 Marathi film Sairat, it featured her as a young upper-class girl whose life turns tragic after she elopes with a lower-class boy (played by Khatter). The film received predominantly negative reviews,  but with a worldwide collection of ₹1.1 billion, it proved to be a commercial success.  Writing for News18, Rajeev Masand criticised the film for removing caste-based references and deemed it inferior to the original, but felt Kapoor had “a fragility that makes her instantly endearing, and a soulful quality that makes it hard to take your eyes off her on screen”.  Conversely, Anna M. M. Vetticad of Firstpost thought that she “lacks personality and delivers a colourless performance”.  She won the Zee Cine Award for Best Female Debut.  In the same year, the cosmetics brand Nykaa selected Kapoor to be their brand ambassador.

Kapoor’s next screen appearance came in 2020 when she starred in Zoya Akhtar’s segment in the Netflix horror anthology film Ghost Stories.  Shubhra Gupta of The Indian Express disliked the segments but added that the “only real surprise comes from Janhvi Kapoor in a solid, real act”.  She then took on the titular role of aviator Gunjan Saxena in the biopic Gunjan Saxena: The Kargil Girl, which due to the COVID-19 pandemic could not be released theatrically and instead streamed on Netflix. In preparation, she spent time with Saxena, underwent physical training, and learned the body language of an air force officer.  Saibal Chatterjee of NDTV described Kapoor’s performance as “passably steady” while Rahul Desai of Film Companion was more appreciative of her “deceptively private performance” which he considered to be “pitch-perfect”.

In 2021, Kapoor played a dual role opposite Rajkummar Rao in the comedy horror film Roohi. The film was theatrically released in India on 11 March 2021 after several delays due to the second wave of the COVID-19 pandemic.  The film and Kapoor’s performance received poor reviews from critics and was deemed a box office failure.

Kapoor will next star in Good Luck Jerry, a Hindi adaptation of the 2018 Tamil film Kolamavu Kokila, produced by Aanand L. Rai.  She will then star in Mili with Sunny Kaushal, a remake of Helen.  Kapoor also has committed to the sports film Mr and Mrs Mahi with Rao  and the action film Bawaal with Varun Dhawan.