All about Google Doodle On Pacman 30th anniversary (4845)

Disha Patani (13 June 1992/Bareilly, Uttar Pradesh, India) is an Indian actress who works primarily in Hindi films. She began her acting career with the Telugu film Loafer (2015) opposite Varun Tej and attained huge recognization for playing Priyanka Jha in her Hindi debut, the sports biopic M.S. Dhoni: The Untold Story (2016).

Disha Patani was born on 13 June 1992/1993, in Bareilly, Uttar Pradesh. She is a Kumaoni,  from a Rajput background.  Her father, Jagadish Singh Patani is a police officer and her mother is a health inspector. Her elder sister, Khushboo Patani is a lieutenant in Indian Army.[6] She also has a younger brother, Suryansh Patani. She studied engineering at Amity University, Lucknow.  She revealed in a radio show that her real surname was Patni rather than Patani.
She was the first runner up of Pond’s Femina Miss India Indore 2013.

Patani debuted with a Telugu film, Loafer alongside Varun Tej in 2015. She played the role of Mouni, a girl who runs from home to escape a forced marriage. Directed by Puri Jagannadh and produced by C. Kalyan under C.K. Entertainment, the film was made on a budget of ₹200 million and performed poorly at the box office with a lifetime collection of ₹106 million. In the following year, Disha appeared in a music video, Befikra along with Tiger Shroff which was produced by Bhushan Kumar and Krishan Kumar under T-Series and composed by Meet Bros. Written and directed by Meet Bros, the singer, Aditi Singh Sharma lent her voice. 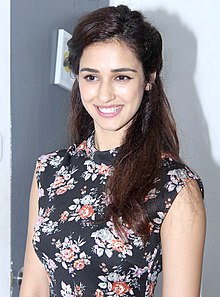 Patani during promotion of M.S. Dhoni: The Untold Story

Patani found her commercial break with Neeraj Pandey’s M.S. Dhoni: The Untold Story, a biographical sports film based on the life story of MS Dhoni, the former captain of the Indian Cricket Team along with Sushant Singh Rajput and Kiara Advani. She played the role of Priyanka Jha, the girlfriend of MS Dhoni’s character who dies in a car accident. Directed by Neeraj Pandey and produced by Fox Star Studios, the film was released on 30 September 2016 and was a massive hit with an estimated collections of ₹216 crore (US$28 million). In her review, Renuka Vyavahare of The Times of India reviewed, “the performance of Disha in the film deserves a special mention as her performance tugs at your heartstrings.” In addition, she also starred in Jackie Chan’s Kung Fu Yoga, along with Sonu Sood.

Patani then acted in Baaghi 2 along with Tiger Shroff, a sequel to the 2016 hit Baaghi starring Tiger Shroff and Shraddha Kapoor. Produced by Sajid Nadiadwala and directed by Ahmed Khan, the film was released on 30 March 2018 worldwide and grossed approximately ₹253 crore (US$33 million) worldwide.. 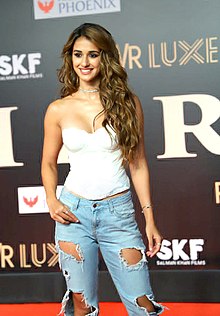 Patani at the premiere of Bharat in 2019

In June 2019, she appeared in the film Bharat starring Salman Khan as one of his leading ladies.

She started 2020 with February release Malang opposite Aditya Roy Kapur. This film was one of the films where she had a major role and it was a commercially successful film. In March 2020, she appeared in a song in the film Baaghi 3 starring Tiger Shroff and Shraddha Kapoor, a sequel to Baaghi 2. Patani next appeared in Prabhu Deva’s action film Radhe, in which she reunited with Salman Khan.