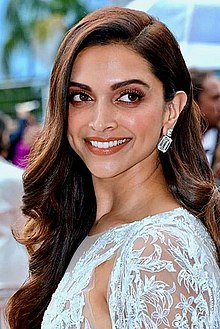 Deepika Padukone ( born 5 January 1986) is an Indian actress who works in Hindi films. One of the highest-paid actresses in India, her accolades include three Filmfare Awards. She features in listings of the nation’s most popular personalities, and Time named her one of the 100 most influential people in the world in 2018.

Padukone, the daughter of the badminton player Prakash Padukone, was born in Copenhagen and raised in Bangalore. As a teenager, she played badminton in national level championships but left her career in the sport to become a fashion model. She soon received offers for film roles and made her acting debut in 2006 as the title character of the Kannada film Aishwarya. Padukone then played a dual role opposite Shah Rukh Khan in her first Bollywood release, the romance Om Shanti Om (2007), which won her the Filmfare Award for Best Female Debut. Padukone received praise for her starring role in the romance Love Aaj Kal (2009), but this was followed by a brief setback.

The romantic comedy Cocktail (2012) marked a turning point in her career, and she gained further success with starring roles in the romantic comedies Yeh Jawaani Hai Deewani and Chennai Express (both 2013), the heist comedy Happy New Year (2014), Sanjay Leela Bhansali’s period dramas Bajirao Mastani (2015) and Padmaavat (2018), and the Hollywood action film XXX: Return of Xander Cage (2017). She also received critical acclaim for playing a character based on Juliet in Bhansali’s tragic romance Goliyon Ki Raasleela Ram-Leela (2013) and a headstrong architect in the comedy-drama Piku (2015), winning two Filmfare Awards for Best Actress. She formed her own company Ka Productions in 2018, under which she produced and acted in Chhapaak (2020) and 83 (2021), both of which failed commercially.

Padukone is the founder of the Live Love Laugh Foundation, which creates awareness on mental health in India. Vocal about issues such as feminism and depression, she also participates in stage shows, has written columns for a newspaper, designed her own line of clothing for women, and is a prominent celebrity endorser for brands and products. Padukone is married to her frequent co-star Ranveer Singh. 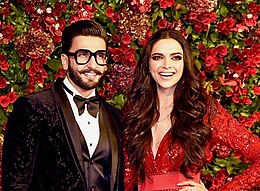 Singh and Padukone at their wedding reception in 2018

Padukone shares a close bond with her family, and visits them regularly in her hometown of Bangalore. She lives in Prabhadevi, a neighbourhood in Mumbai, and has admitted to missing the presence of her parents there.  A practicing Hindu, Padukone considers religion to be an important aspect of her life and makes frequent visits to temples and other religious shrines.

While filming Bachna Ae Haseeno in 2008, Padukone began a romantic relationship with co-star Ranbir Kapoor.  She spoke openly about the relationship and sported a tattoo of his initials on the nape of her neck. She has said that the relationship had a profound effect on her, transforming her into a more confident and social person.  The couple broke up a year later;  she professed in an interview to feeling betrayed for a long time.  In a 2010 interview, Padukone accused him of infidelity, and Kapoor later admitted to it. They reconciled their friendship while working on Yeh Jawaani Hai Deewani.

Padukone subsequently became reticent to discuss her personal life, but in 2017, she fondly spoke of her relationship with her frequent co-star Ranveer Singh, whom she began dating in 2012. In November 2018, the couple married in traditional Konkani and Sindhi ceremonies at Lake Como, Italy.

The Asian Film Awards are presented annually by the Hong Kong International Film Festival society to recognize excellence of those in the Asian film industry.  Padukone has received two nominations.

The BIG Star Entertainment Awards is an annual event organised by the Reliance Broadcast Network. Padukone has won six awards from sixteen nominations.

CNN-IBN Indian of the Year[edit]

The CNN-IBN Indian of the Year is an award presented annually by CNN-IBN since 2006 to Indians who have been judged to have helped strengthen society and build Brand India during the year.[16] Padukone has received one award from two nominations.

The Filmfare Awards is one of the oldest and most prominent Hindi film award ceremonies. They are presented annually by The Times Group to honour both artistic and technical excellence.[20] Padukone has won three awards from 10 nominations.

The Indian Film Festival of Melbourne (IFFM) is an annual Indian film festival based in Melbourne, Australia. It is presented by Film Victoria and the State Government of Victoria, and produced by Mind Blowing Films, a Melbourne-based distributor of Indian cinema across Australia and New Zealand. Padukone has received four nominations.

NDTV Indian of the Year

The NDTV Indian of the Year is an annual award presented by NDTV. Padukone has received two awards.

The People’s Choice Awards India is the Indian version of the American awards show recognising Indian film, television, music and sports.[50] Padukone has received one nomination.

The Stardust Awards are presented by Stardust magazine. They honour professional excellence in the Hindi film industry. Padukone has won three awards from thirteen nominations.

The Teen Choice Awards is an annual US award ceremony show that airs on the Fox Network. The awards honor the year’s biggest achievements in music, movies, sports, television, fashion and other categories, voted by teen viewers.

The Zee Cine Awards are presented by Zee Entertainment Enterprises for the Hindi film industry. The awards were inaugurated in 1998 and are a mixture of categories decided on by public votes and by an industry jury. The awards were not presented in 2009 and 2010, but were resumed from 2011. Padukone has won seven awards from Fourteen nominations.