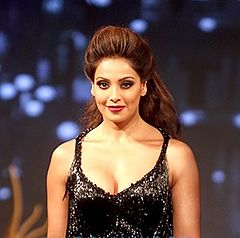 Bipasha Basu Singh Grover (born 7 January 1979) is an Indian actress and model. Primarily known for her work in Hindi films, she has also appeared in Tamil, Telugu, Bengali and English films. Basu is the recipient of numerous accolades, including one Filmfare Award. Particularly known for her work in the thriller and horror film genres, she is frequently cited in the media as a sex symbol and a scream queen.

In addition to acting in films, Basu is a fitness enthusiast and has featured in several fitness videos. Following a high-profile relationship with actor John Abraham, Basu married actor Karan Singh Grover in 2016.

Bipasha Basu was born on 7 January 1979 to a Bengali family in Delhi. Her father, Hirak, is a civil engineer, and her mother, Mamta, is a homemaker. She has one elder sister, Bidisha, and one younger sister, Vijayeta. According to Basu, her name means “dark deep desire”, and is also a river’s name.

In Delhi, Basu lived at Pamposh Enclave, Nehru Place, till the age of eight and studied at Apeejay High School.  Her family then shifted to Kolkata, where she attended Bhavan’s Gangabux Kanoria Vidyamandir, located in Bidhannagar. In her school, Basu was appointed as the head girl and was fondly called ‘Lady Goonda’ due to her short and commanding personality. She remarked “As a child, I was a tomboy and I was pampered a lot, due to which I became very naughty. I used to keep a stick in my hand and straighten out all the colony boys if they acted smart. I used to be very short as a child and I was the monitor in school. When the tall boys would be up to mischief, I’d jump on their back during breaks and pull their hair and beat them up”. Basu was enrolled in medical science studies until twelfth standard, but switched to commerce thereafter.

In 1996, Basu was spotted at a hotel in Kolkata by the model Mehr Jesia Rampal, who suggested she take up modelling.  That year, she participated in and eventually won the Godrej Cinthol Supermodel Contest (organised by Ford), thereby representing India at Ford Models Supermodel of the World contest in Miami. She later appeared in the Calida commercial with her then-boyfriend Dino Morea, which was controversial for picturing them sultrily; she had some protesters outside her house after that. With appearance on several magazine covers, Basu continued to pursue a career in fashion modeling during her late teens, until she became an actress. 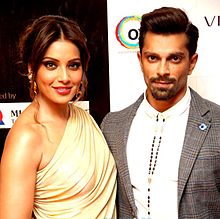 Basu with her husband Karan Singh Grover in 2015